A fungal mycelium based packaging 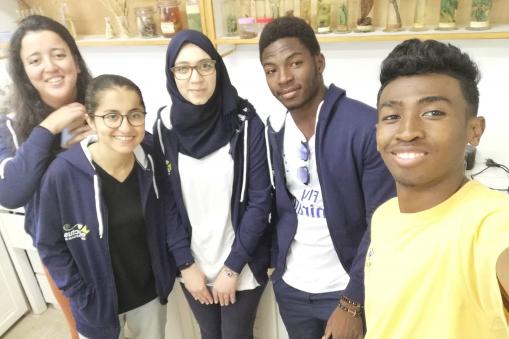 Kenza joined by Milancha, Honoré, Manal and Malika, all students at IAV Hassan II engineering school, have developed a bio-degradable, natural and reusable alternative to polystyrene plastics based on fungal mycelium. Their product, Fungipack, is made of raw materials from non-recovered waste: coffee grounds, cereal seeds and fungus to extract the mycelium. The production process takes an average of 10 days, from inoculation to the manufacture of natural polystyrene. After use, when waste is abandoned in the environment in contact with soil and water, decomposition occurs quickly and the residues are an effective fertilizer for the soil.

Fungipack aims to achieve zero polystyrene plastic in the three countries of the members, namely Morocco, Madagascar and Togo, initially, then throughout Africa and the world.
In January 2019, the project won the 3rd prize of the French Maghrebian Incubator resulting from a collaboration between the “Dare Inc” innovation and social entrepreneurship programme of MCISE and Agence Universitaire de la Francophonie (AUF) and is currently being incubated by the Cluster Solaire.

Fungipack joined THE NEXT SOCIETY in 2019 when it was selected among the 15 most promising solutions addressing the “Zero plastic waste in the Mediterranean in 2030” challenge launched by the South region in France.